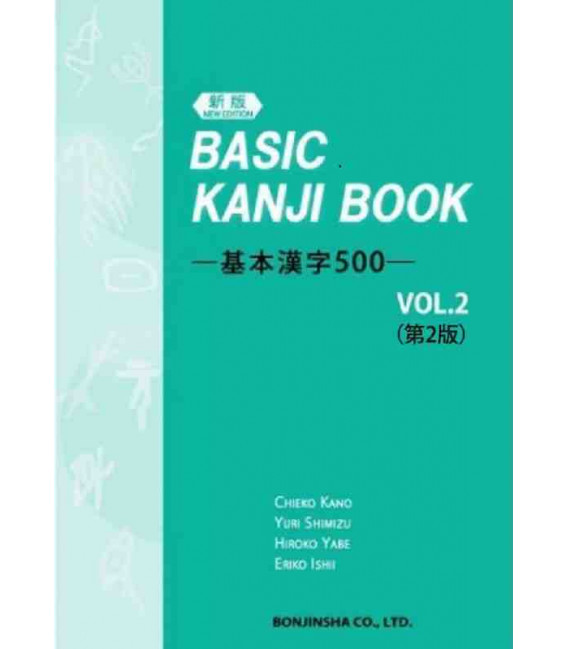 These books are really textbooks just for learning kanji. Each lesson covers about 10 characters and begins with a section called 'About the kanji' which gives interesting background on the kanji you are about to learn. Next comes writing and reading lessons for each kanji. Lastly, there is a longer reading section followed by a game or some quiz.

In the field of Japanese language education, memorizing Kanji has largely been entrusted to the students' individual efforts. It goes without saying that a good command of Kanji is necessary to read and write Japanese, and it takes time and persistence to reach the level where students can read and write Kanji fluently. Until now, due to inadequacies in teaching materials, many students have understandably been designed with this in mind and aim to teach Kanji both systematically and effectively.

In these texts, Kanji are examined according to the following five features.

1) Kanji with complicated shapes
2) Kanji comprised of several components
3) independent characters which both express a meaning by themselves and play an important role in forming other words
4) the combination of Kanji and Hiragana or Katakana in written language
5) characters with several different readings and meanings.>p> To deal with the areas of difficulty outlined above, it is necessary to give systematic explanations of Kanji as they are presented and to set an attainable goal by selecting a minimum number of basic Kanji for students to memorize.

Instead of memorizing Kanji merely as they show up, these books introduce their origin systematically and show how these characters are used in combination with other Kanji to form words often seen in daily life.

The expectation that students will be able to learn to read and write the basic 500 Kanji by the end of this course is reflected in the following aims:

1) to give a broad explanation of what Kanji are comprised of (i.e. origin, meanings of independent characters, 'ON-KUN readings, calligraphy, radicals, etc.);
2) to help students achieve competence in reading Kanji (including ability to infer the meaning of a Kanji from its construction, analyzing Kanji compounds to arrive at their meanings, etc.);
3) to teach effective ways of memorizing Kanji so that students can make not only perceptive but also productive use of their knowledge.

The 500 basic characters for beginners have been chosen primarily on the basis of how effectively they can achieve the aims described above. The following five points have also been important in the selection process.

1) Kanji that clearly represent one concept being introduced in the class have been selected (e.g. pictographs, ideographs and logograms)
2) To achieve competence in reading, verb-Kanji, adjective-Kanji and nominal Kanji which are frequently found in texts and used in daily life have been chosen.
3) In order to teach the concept of radicals, to some extent, each Kanji with a radical has been grouped with others of the same type.
4) Frequently-used Kanji and those characters which are highly useful in forming new words are included.
5) Personal and place names, and Kanji that are often confronted in everyday-life are introduced in addition to the basic 500 characters.

We must note here that these 500 characters include some Kanji which themselves are not so frequently used but are helpful, because they work as elements of many other Kanji. We also must mention that there are some explanations given in this material which are in fact differ from the actual derivation of a certain Kanji or radical. We have taken this liberty because we feel that these explanations will be more easily understood by students and more effective as aids in memorizing Kanji.

To be determined Shipping
0,00 € Total